PENAMPANG: Though their village remains inaccessible by road, 400 villages of Kampung Buayan on the Crocker Range here are enjoying round-the-clock power supply.

The electricity is not only free but is produced in a pollution-free way by harnessing the power of a nearby river. 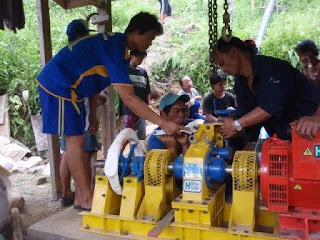 This mini-hydro system was launched by Penampang MP and Minister in the Prime Minister’s Department, Tan Sri Bernard Dompok, on Monday.

Having power supply means so many things to so many people here. Schoolgoing children are now able to study at night and use a computer at home,” said Robert Gubal, 33, headmaster of the village’s only primary school which has 53 pupils.

Kampung Buayan chief John Sabating, 45, said the system was capable of generating up to 10 kilowatts of electricity. The villagers no longer needed to rely on kerosene lamps and small generators that used expensive petrol, he said.

“The system also means there is no longer a need to carry fuel from Donggongon town, which required a three-hour walk and a hour’s ride on a four wheel drive,” he added.
Village technology: Dompok (right) being briefed about the system by Pacos Trust member Adrian Lasimbang (left).

Pacos Trust president Dr Felix Tongkul said the Kampung Buayan mini-hydro system was the fifth to be supported by Pacos, with the earlier ones being built in Long Lawen, Belaga and Bario Asal in Sarawak and Kampung Terian and Kampung Bantul in Sabah.

The system produces electricity via a small turbine with an electronic load controller for stability and safety.

The project included enrichment planting and mapping to ensure sustainability of the water resource that ran the system. Dr Felix said the system incorporated a rice mill and an irrigation system as well. 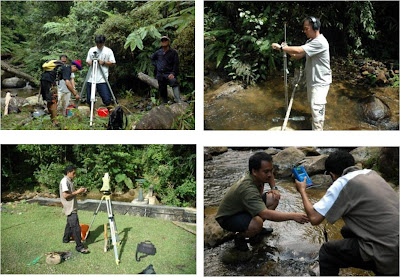 Another story on the opening ceremony of our 4th community micro hydro in Pensiangan and 12th in Malaysia in the Boreno Post.. see link below
http://www.theborneopost.com/2011/10/19/minihydro-power-for-fourth-remote-village/
Posted by BANIE at 3:18 AM No comments:

Bank brightens lives of 200 with hydropower

PENSIANGAN: It used to be annoying for pupils in the remote Kampung Nabawan, near here, to study as they were disturbed by the sound but the noisy generators have since been replaced.About 200 people from 25 homes here can now lead brighter lives thanks to a 3kW micro hydropower generator.Located about five hours' drive from Kota Kinabalu and an hour's boat ride, the riverine village has become the latest remote area in the district to be powered with renewable energy.This is the result of a successful collaboration between the non-governmental organisations, corporate sector and the rural communities there.


The RM89,000 project was funded by CIMB Bank through the CIMB Foundation that channels grants to projects under its Community Link initiative.The project took 10 months to complete in a gotong-royong manner by community members, who received technical support from indigenous people-focused non-governmental organisations (NGOs), namely Tonibung, the Jaringan Orang Asal SeMalaysia (Joas) and Pacos Trust.

Nabawan assemblyman Datuk Bobbey Suan said one of the immediate beneficiaries of the project were children."They can now enjoy a more conducive environment at home to study under better lighting and without the annoying loud noise of a diesel-powered generator set," said Bobbey, who is also Sabah assistant minister of agriculture and food industry, during the launch of the programme.


Project coordinator Adrian Lasimbang said having renewable energy as their source of power had relieved villagers of a heavy financial burden.Previously, they were generating electricity to their homes using generator sets with fuel costs between RM200-RM300 monthly, which was rather an expensive amount for a community of traditional fishermen and farmers."Now, instead of spending money on fuel, they can generate some extra income."Renewable power allows them to keep their fish fresh. They can now fetch a higher price at the local market," said Adrian, who is also the climate change workgroup expert in Joas.


Adrian was previously involved in the setting up of micro hydropower system in three other communities along the Pensiangan River -- namely at Kampung Bantul, Lumpagas and Inakaak.He hopes to replicate similar projects in areas still too remote from the power grid.To date, only about 30 per cent of areas in Pensiangan district is connected to the electricity grid.